Hot off the press: Alison Wonderland's drops her new track, Lies, from her upcoming Calm Down EP, out this Friday. The Shins return with single for Zach Braff's film, 'Wish I Was Here'

Fresh out of the shower with my bathroom rendition of Simple Song still ringing in my ears, it was my delight to discover that The Shins had a new release to add to my repertoire. Those who remember Garden State (I personally try to forget it) will recall The Shins' involvement in the movie with the most notable being New Slang, a song Zach Braff's character describes as having the power to 'change your life'.

Braff has called on his American indie-rock muses again to help soundtrack his new Kickstarter-financed movie Wish I Was Here, stating,"It's no secret I am a giant fan of The Shins. For this film, I asked James Mercer if he would consider writing something original, inspired by his first impression of seeing the film. Not only did he say yes, but what he came back with gives me goosebumps every time I hear it. He is a savant."

So Now What is an unfair taste of what's not to come, with no The Shins album currently in the works. Get prepared for goosebumps as you listen to James Mercer AKA The Savant's lilting vocals below:

Wish I Was Here is due for release in the US July 18. Its soundtrack also features works by 17-year-old Melbournian, Japanese Wallpaper, as well as Bon Iver, Paul Simon, Badly Drawn Boy and a special collaboration between Coldplay and Cat Power. Catch the trailer here:

Saturday night just got interesting. Even if you're by yourself, sitting in your room (with a cheeky glass or two), these two new tracks are bound to make you feel like your feet are planted on the floor of a sweaty club. The first is, All Under One Roof Raving, by Jamie xx. It was premiered on Annie Mac's BBC radio show, where Jamie revealed the song was created to be "something I could play out that reminded me how good home is". We may not share the same Northern hemisphere home as the beats master but the track is no less relatable. Steel drums and a hip-hop vocal sample are the perfect remedy for a Saturday night. We only wish that we were under one roof raving with Jamie himself.

The second is the first single off Scottish producer, Rustie's new album, Green Language. While Jamie keeps it controlled, Rustie blows the roof off with Raptor. Shotgun beats underline a trap-inspired track that typifies Rustie's total anarchy style. This one is definitely not for a quiet night in, but if you're not out already it's bound to make you don an outfit and hit the clubs. Just wait for dat drop.

Both the tracks require a bit of detective work to find but they are well worth the hunt. They both premiered on Annie Mac's radio show which can be found here. Jamie XX's All Under One Roof Ravings plays at about the 60 min mark while Rustie's, Raptor plays around 1hr 21mins. 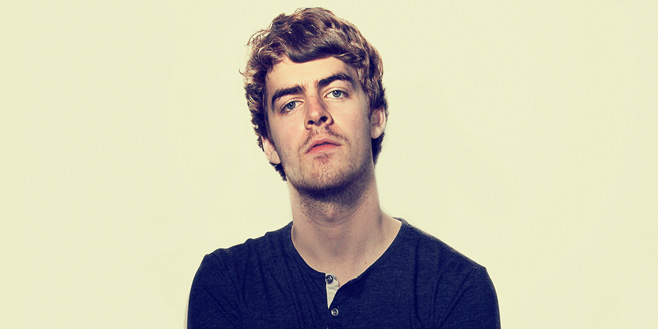 Following through with his promise to Facebook fans yesterday, favourite in theinterns office, Ryan Hemsworth, dropped new song, 'Every Square Inch,' overnight. Created in collaboration with Japanese producer,  Qrion, 'Every Square Inch' is like sour skittles bouncing their way down a techno-coloured rainbow. Straight A Hemsworth with its vulnerable highs, bursting over defiantly get-low lows, 'Every Square Inch,' has us excited for the release of his October LP, Guilt Trips. Melbourne duo, Willow Beats have been gaining momentum since the release of their first single, Blue, and have moments ago announced they have signed to Big Scary's record label, Pilerats. Merewif is their first release on the label and is also the first offering from their forthcoming second EP due out 27 June. Merewif is a skittering but ethereal cut, "Stooped in fantasy, mystery, and the stories of Hare Krishna folklore", according to their Soundcloud. It's a minimal sound that they are quickly carving out as their own. This new signing is bound to catapult them into an even larger audience.

Miley Cyrus pops up on new Alt-J single, 'Hunger Of The Pine'

It's probably not two names you'd expect to hear in the same sentence but Alt-J have sampled Miley Cyrus' 4x4 on their new track Hunger Of The Pine. Hunger Of The Pine is lifted from their forthcoming sophomore effort This Is All Yours and it's slow-building, oddball track. It doesn't have the same immediacy as a track like Tesselate but it does indicate that the band have been trying new things including what sounds like a more synth-heavy sound. This Is All Yours will drop in September and follows their acclaimed debut, An Awesome Wave. New Zealand duo Broods, get straight to the heart of the matter in their new song, Mother & Father.With a catchy cascade of lyrics and pulsing chorus reigning out across a defiant drum beat, the duo's latest offering embodies that perfect young adult contradiction: Strong but not quite strong enough. Although Mother & Father doesn't feature on their current EP, it's got us all excited for the release of their up-coming debut album. [soundcloud url="https://soundcloud.com/broods/broods-mother-father" iframe="true" /] The '90s was a prosperous time for girl bands, so it makes sense that the recent resurgence of girl bands has come with a certain '90s nostalgia attached to it. The latest group to try their luck in a quick-filling market is British RnB trio M.O. They're more likely to have hung with TLC than the Spice Girls back in the day with their sound focussed on lush harmonies and sassy intonation. The latest offering from the trio is, Dance On My Own. Just as Robyn did, they've made dancing on your own sound like a stack of fun, with drum n' bass-lite beats and a delectable vocal sample scattered throughout. If anyone's going to bring the '90s girl group renaissance to the mainstream, it will be these three.